BANGKOK: Dr. Kanokwan Chodchoey, APSA Executive Director, has issued a statement to address and allay concerns about impacts of Corona Virus 2019 (CoVid-19) on seed trade in Asia and the Pacific.

Pointing out that food and seed — and international packages containing seeds and other vital agricultural inputs  — are not a source for coronavirus transmission  (download full statement), Dr. Chodchoey requests “full support from concerned government agencies … to ensure that all relative services such as laboratory testing and phytosanitary certification and clearance, continue to operate at full capacity.”

The statement was issued in response to a growing number of inquiries APSA has received about potential impacts on seed trade, as a number of countries have begun to implement restrictions on travel and other emergency measures to contain the spread of SARS-CoVid-2, the virus that causes CoVid-19, which was recently declared a pandemic by the World Health Organization.

As a result of said restrictions, a number of important 2020 international seed industry events have been cancelled or postponed in the past month.

Nonetheless, the movement of seed across borders should not be affected considering that coronaviruses have poor survivability on surfaces, and it is highly improbable that coronaviruses can survive international transport — especially true for shipments of seed handled by leading international seed companies that already employ strict sanitary, phytosanitary and hygienic handling protocol in accordance with international standards, as Dr. Chodchoey relays in the APSA statement.

In addition, APSA has also developed an infograph so as to highlight the key message.

Seed industry stakeholders are hereby invited to share and circulate the statement and infograph as follows: 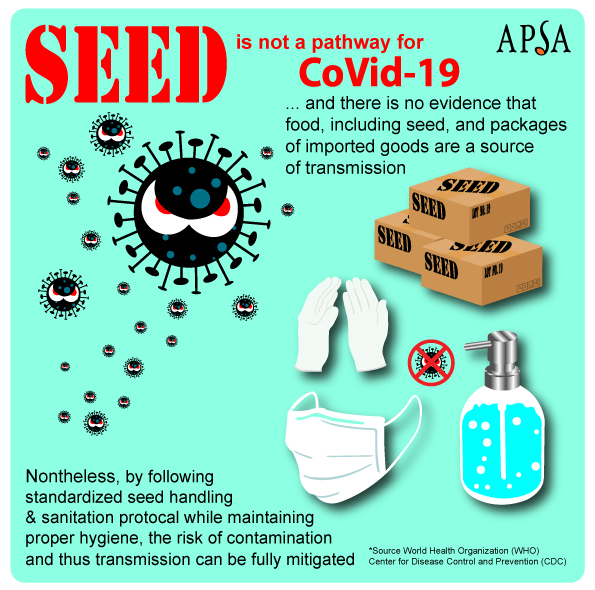 In its own statement issued earlier this week, the International Seed Federation (ISF) has also rallied for public sector cooperation to minimize obstacles and restrictions on international seed movements:

“Closing borders or even slowing down the transboundary movement of seeds could create a significant problem in the seed supply chain.

“March and April are the most critical months for the sowing of spring crops (maize, sunflower, soybean, canola, spring wheat and barley, open field vegetables, etc) in the northern hemisphere and autumn crops in the southern hemisphere. If farmers miss this window because seed is not delivered to the fields in time,” the ISF statement reads.

In related developments, the American Seed Trade Association (ASTA) in a March 14 email to stakeholders, noted that shipments between the US and EU are not impacted by a 30-day travel ban imposed on foreign, non-U.S travelers between the US and Schengen region, which consists of 26 countries in Europe, stating that “..both ocean and air carriers continue to move cargo across the Atlantic…” and “Global couriers such as FedEx and DHL continue to move cargo globally, with some service delays or restrictions in regions experiencing CoVid-19 spread.”

Nonetheless, the statement from ASTA pointed out that “Ocean shipping volumes in the Trans-Pacific remain imbalanced as China manufacturing operations recover, leading to intermittent shortages of containers.”

APSA has received a number of reports from stakeholders within China that the domestic situation there is rapidly normalizing.

We will continue to highlight these leads, from China and around the region in our monthly news round-up, as we continue to monitor the situation closely.

Meanwhile, should you have any further information or leads about impacts on trade, don’t hesitate to reach out to APSA Executive Director, who can be contacted directly via email, as shown on the attached statement, linked here again.