Some 1,500 delegates from more than 50 countries are attending the 26th Asian Seed Congress this week in Kuala Lumpur, Malaysia.

Organized jointly by the Asia and Pacific Seed Alliance (APSA) and the National Seed Association Malaysia (NSAM), the region’s premier seed industry meeting will be held at the Kuala Lumpur Convention Centre (KLCC) from 25 – 29 November.

The location of the meeting rotates among APSA member countries yearly in cooperation with a National Organizing Committee (NOC) of the designated host country.

The for-members and by-invitation-only event features business meetings, entertainment, a trade exhibition, technical sessions and APSA’s Annual General Meeting, which is scheduled to take place this year on the afternoon of November 28.

This is the second time Malaysia is hosting the event, with a previous Kuala Lumpur edition held in 2006.

The theme for ASC 2019 is “Plant Variety Protection as a foundation for seed sector development”. This theme will be the focus of the ASC Congress Workshop, which will take place on the afternoon of November 25.

At the Workshop, Asia-Pacific seed industry representatives from private enterprises, government agencies and non-governmental organizations discussed the status, challenges and opportunities of PVP education and enforcement trends in the region.  See more details about the Workshop here.

The topic and importance of PVP and Intellectual Property Rights will resonate throughout the week, in meetings and technical sessions organized by APSA’s technical committees.  Other priorities on the Congress agenda include biodiversity, plant breeding innovation, seed movement phytosanitary measures, emerging pests, production technologies and market trends.

Value of international seed trade on the rise

According to official trade figures analyzed by APSA, last year more than US$ 4.14 billion worth of sowing seed was traded to or from countries in the APSA region, which spans East, Central, West, South and Southeast Asia, in addition to Oceania and the South Pacific.

It should be noted that this figure represents official trade figures for various types of seed for forage, field, vegetable and ornamental crops, reflecting the value of all official import and export consignments reported by World Trade Organization (WTO) countries, and logged by the International Trade Commission. However, these figures do not include trade of seed potato, seeds for various types of spices, or oil seeds and oleaginous fruits. (See end notes)

Of APSA’s sowing seed trade in 2018, US$2.61bn worth of the consignments were imports, while US$1.53bn were exports, resulting in a region-wide deficit of over $1bn.

Globally and regionally, the international trade of sowing seeds grew in 2018, as the val-ue of exports from APSA countries increased year-on-year by 4.8%, with imports up by 6%. This is compared to average growth from all WTO countries combined, up by 7.2% and 3.7%, respectively.

Surpassing China as the region’s top seed-supplying country in 2018 was India, which exported some US$284.3 million worth of seed, representing 18.4% of APSA region seed exports, and about 2.4% of those from all WTO countries. Such exceptional growth was especially reflected in consignments of maize seed (+69% to $69.1mn) and unhusked paddy (+47% to $91.1mn). 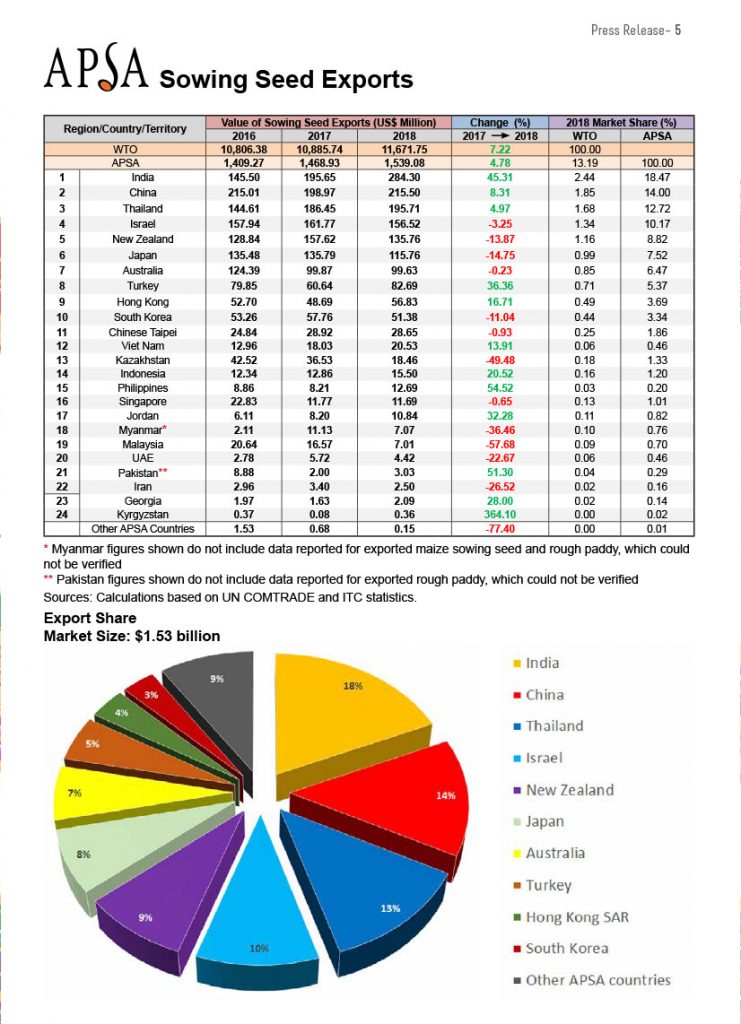 Seed exports from APSA countries grew year-on-year by 4.6%, with several countries logging substantial export growth in 2018 compare to 2017: the Philippines (55%), Pa-kistan (51%), India (45%), Turkey (36%), Jordan (32%), Georgia (28%) and Indonesia (21%) logged the highest growth rates, if not counting Kyrgyzstan, where seed exports grew y-o-y by an explosive 364%, considering that the overall value of exports from the Central Asian nation is insignificant compared to most other APSA countries. (See Figure 1 for exact figures.)

Only seven of APSA’s most active countries/territories sustained a surplus in seed trade last year. They were Thailand ($163.9mn), India ($162.8mn), Israel ($107.9mn), New Zealand ($31.6mn), Singapore ($5.6mn), Hong Kong ($3.9mn) and Indonesia ($2.38mn). Indeed, a majority of APSA countries continue to depend on inbound seed shipments for both domestic cropping and re-export purposes.  In conclusion, overall demand for sowing seed is growing – domestically, regionally and globally. Increasing demand not only refers to quantities of seed, but especially the quality of seed.

This fact underlines an increasing necessity for strong linkages and cooperation among all stakeholders at all levels in order to address and overcome a plethora of challenges, including an increasingly volatile climate, the emergence and spread of destructive pests, and uncertain economic and geopolitical factors that directly or indirectly affect production and trade.
Such challenges – as well as strategies with which to overcome them – will be discussed at this year’s Asian Seed Congress in Kuala Lumpur, Malaysia.

Notes about figures cited in this report:

Not counted in this figure are seed potato, seeds of tobacco, herbs, spices or oleaginous fruits and plants, such as palm, melon or hemp. Also omitted from this report are figures reported for the export of maize seed and rough paddy from Myanmar; rough paddy from Pakistan; as well as soya bean seed imports to Pakistan and Malaysia, as the reported data for these categories was extremely anomalous and could not be verified via reciprocal mirror data from partner countries.

For details about specific types and quantity of seed traded by country, please contact Steven@apsaseed.org